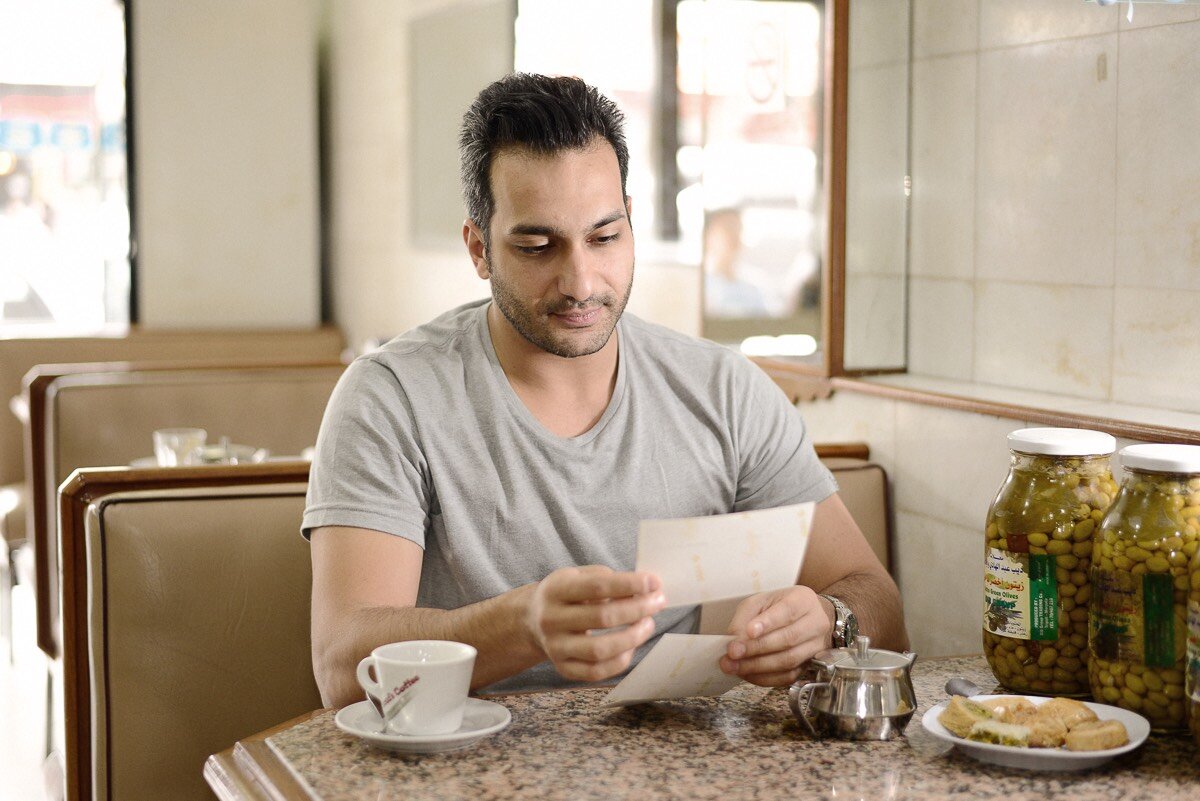 When my sisters and I were young, we always enjoyed going for drives with my mother and father. All five of us would just fit in the back seat of my father’s 1987 Mercedes. We would sit so close to each other, arguing about whose arm would be over the other. We were like a pack of sardines. We used to tell stories and share jokes continuously, making my father laugh so suddenly his foot would release from the accelerator.

In 2005, my sisters and I sat in the back of a 1987 Mercedes. But this time it was a yellow taxi travelling east along the main highway of Amman, Jordan, taking us back to Palestine. It was only three of my sisters and my mother. Dalia, my oldest sister, had to stay back in Sydney to look after her two year old daughter. It was a long drive. We still didn’t have space between us but we were holding on to each other’s arms tightly.

We were only going eighty kilometers per hour but the taxi was rattling. The driver’s moustache kept grabbing my attention. It reminded me of the short guy from the Three Musketeers; the one that always twirls his moustache when he’s thinking of an idea. It was starting to get on my nerves along with the way he was swerving between the cars, making me nauseous. “I knew we should have booked the taxi before,” I said to my sister. In the Middle East, especially in Jordan, nothing ever seems to run on time; the economy, the shops and the people have no sense of punctuality. Everything was taking too long. But I wasn’t sure if my irritation was due to the situation or my anxious thoughts.

From the back seat, I glimpsed the checkpoint that we were so used to seeing on the television. The white and blue Israeli flags, so small before, were reproducing one after the other. The taxi driver spat at the steering wheel, “This is where the white soil and the black soil separate.” Usually when my mother cries, tears start to build in my eyes. This time Sahar, the second oldest, began to cry and I just put my arm around her. “It is such a strange feeling,” she said. I thought about the days before I planned to go for this trip. My excitement wouldn’t let me sleep for days before my departure. I looked away from the flags and tried to keep my eyes straight ahead. “I wish you guys were as quiet as this at home,” my mother said.

We arrived at the drop off. The taxi door opened, it was as if the vacuum lid had been broken and the desert’s suffocating breath rushed in. We were about fifty meters away from the main entrance. Many people were walking around, I couldn’t tell who was Arab, but I picked the Westerners from a distance. We unloaded our luggage and walked towards the sliding doors.

The checkpoints had cracks along the side of their 1970s brick walls. The unmarked soldiers were armed with AK47s longer than their legs. The floors were polished concrete. The soldiers fixed their eyes on the people coming and going through the checkpoint. The soldiers seemed more anxious than the Palestinians coming in. The building reminded me of the setting to the movie No Man’s Land when a Serbian and Bosnian soldier sat in the ditch and argued about who had more right to it. This building had trapped the agony that was not felt by the outside. Confusion mixed with the loud noise-there were so many voices, but I couldn't make out any of the stories. The soldiers looked young, probably eighteen years old and were yelling at a sixty year old woman. Edward Said once said, “You cannot continue to victimize someone else just because you yourself were a victim once—there has to be a limit”. The building reflected shadows of the faces from both sides of the checkpoint. As I glanced over the crowd of people, I saw three and four generations. So much time had passed, yet each generation was still waiting for the same reasons.

Before 1947 Palestinians were patient. Today, they are impatient and I could sense an outburst ready to happen. Most have been waiting to cross the border for hours, some for days, others a lifetime. It was a crowd of frustrated and restless people. There was no beginning or end to the crowd and no sense of order. A few young kids were trying to guess where my accent was from. It was my turn to squeeze through a couple of people to get to the foreign passport counter.

I have always complained how time goes by slowly in Sydney. My grandmother said to my mother that time went by too quickly when we were in Amman. She had left behind the pot plants that she grew her mint in Tul Karem. She said there, the soil was so fertile, you could smell mint from a distance. My cousins and I used to sit around her on the edge of her chair when she spoke. She would place her left palm over the edge of the balcony and trace the outline of the olive tree. “I was born by the well and among these plants and trees.” She told us how her mother was the olives and her father was the stem. She would tell us, “Maybe if I wasn’t here then you wouldn’t know about your home. Time is the only true healer. But who am I to talk about time?”

I looked back into the crowded room. In the distance, I saw one of my cousins from Amman. He was the nicest cousin. He was also one of the few cousins that had an American passport. He stood, looking out, just waiting.

After all these years, I finally started to understand what time meant in this land.