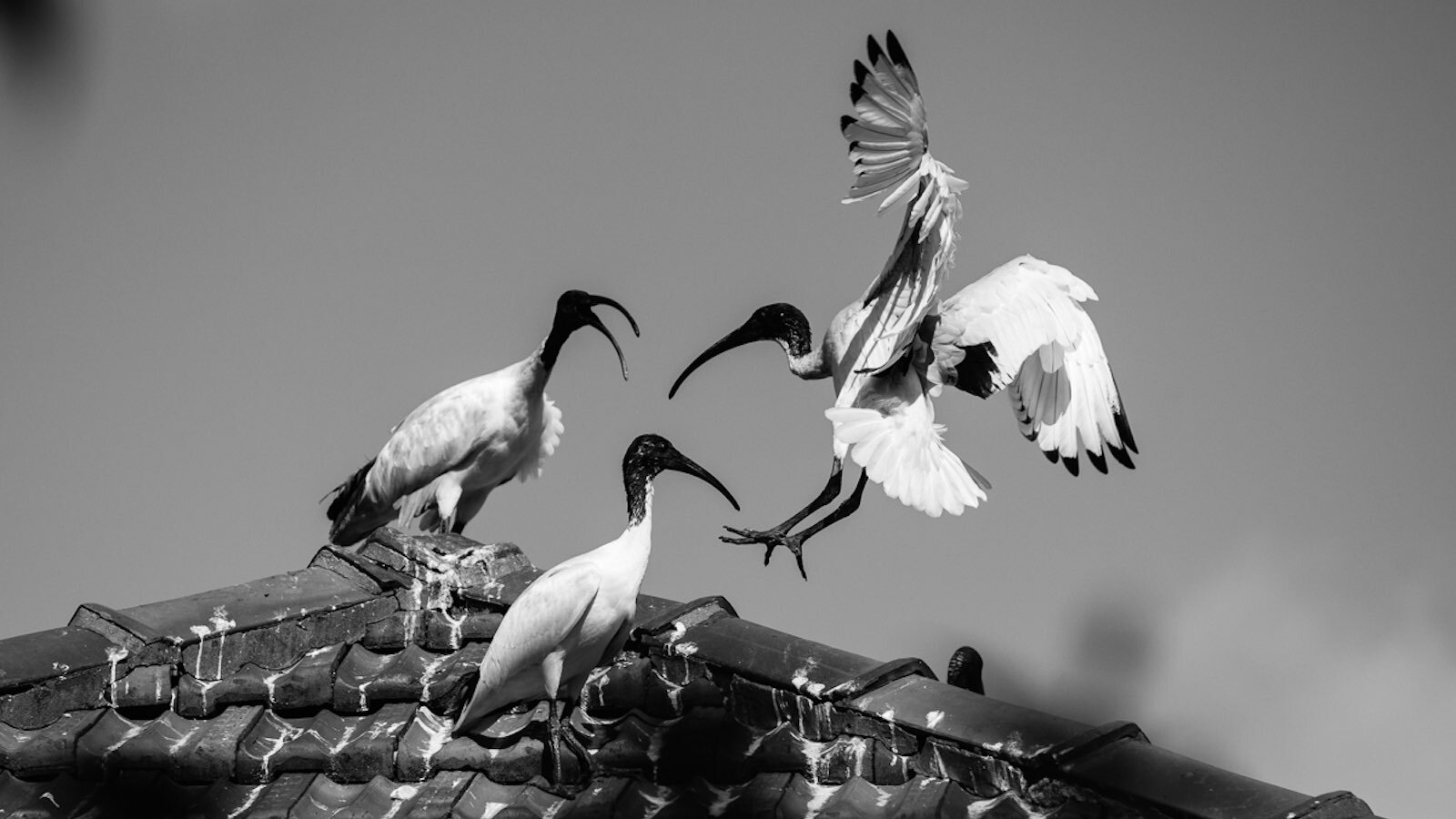 It is six in the morning, the ibis are stirring and the battle lines have been drawn. Bankstown lies on a nubbly ridge and with neither the relief of a coastline nor the escape of mountain peaks there is no landscape to give it perspective. As the continental plate wrestled beneath the earth's crust 140 million years ago, it heaved the Blue Mountains heaven bound and pushed down the Cumberland Plains of Western Sydney along a crease known as the Lapstone Monocline and the Kurrajong Fault line. The Georges and the Hawkesbury-Nepean Rivers, sensing opportunity, moved alongside the tectonic plates, cutting gorges through the sandstone. Wianamatta shale. Bringelly shale. Ashfield shale. Lying on this fragile loamy bed of silt and clay, Bankstown straddles what is technically called a 'transition zone'.

I had grown up in Sydney city and I was tired. Every terraced lane and curve of the road felt like a personal tracking of heartbreak and failures, and the streets jostled in my mind, overcrowded with memories. There were no secret pathways left. I moved out to Bankstown knowing I needed to escape city limits but unsure of what I would find. Bankstown was not a place that evoked nostalgia or contemplation. It was a place known for its public torchings, race riots, drive by shootings and reports of gang violence. “A man was found decapitated just this morning,” the talkback radio proudly reported, goading his callers to respond. Bankstown loomed in the public imagination as a concrete warpath—bitumen and steel grinding against each other; a modern day experiment in multiculturalism sparking on the fault lines. An hour out of the city in the South-Western suburbs of Sydney and reached by a warren of freeways, it was an inland trip from the coastal tropics. Bankstown was harsh and vibrant. There was no ambient lighting—just an incandescent light bulb that hung from the sky keeping it under media scrutiny.

Maps of the battle zones had been sketched for a long time. There were borders with faint dotted demarcation lines resting in the mind between the 'West and the Rest' of Sydney. The West was a distant place. Out West, there were fewer jobs, fewer general practices, less infrastructure and fewer ways to get in—or out. Reported like a stain on society, the Western suburbs sat awkward and hunched, flushed of face and apologetic. It was the place no one wanted to go, the place where 'Bigots', 'Bogans', 'Lebs' and 'Ignorance' reigned. There were the thick, wobbly lines dividing the cultures. In most minds Bankstown could have been as far away as the war in Afghanistan and riots in Syria—“it was all an overflow of these wars anyway”—viewed as a battleground for others’ cultural wars being fought down the orange train line. There were the unofficial borders from the bustle of 'Little Saigon', the 'African zone' by the station and the 'Arab hangout' with the sweet shop optimistically named 'Melting Spot'.

In 2013, the trumpets sounded again as the Federal election was called. Once a safe working class Labor government seat, disillusioned voters no longer knew where to look. Australia's ‘heartland’ had always been dismissed in the popular national consciousness but now, sensing uncertainty, the Two Party System was flexing its political muscle eager for prize votes. The battle for the West began. Like the eye of Sauron, the national gaze was shifting to the forgotten suburbs; troops were rallied, press conferences mobilised and an influx of heavyweight champions was brought to fight out the federal election in a far away outpost. As politicians flocked to the region, their mouths could be seen promising better public transport, employment, more access, and greater understanding as their eyes darted around nervously. Journalistic gaffs were made about slumming it to the region. Eyes were rolled while outsiders whispered about, “Catering to the lowest common denominator.” As they talked and the flash bulbs went off, the people were starting to realise someone else was living what they'd been promised. They were tired too. Their future was hurtling forwards and when all of the fanfare disappeared, they would be the ones left behind.

Bankstown has always evoked a reverential fear. In the 1800s, residents lay awake in the black terror of the night, thinking about bushrangers. These grizzled men, these makers of spirited law amongst the melaleuca shrubs. In 1830, the Reverend James Hassall said the Bankstown district was, “as wild and godless a place as I have ever known, although so near Sydney. ” In 1826, two bushrangers from Sullivan’s Gang were captured who notoriously operated across the Blue Mountain Ranges in the Bathurst region. They were shackled and dragged along Liverpool Road to the present-day Bankstown water tower and publicly executed to demonstrate what happens to those thinking of embracing the romance of becoming an outsider.

Places in Sydney were called as our forefathers saw it: Town Hall, Green Square, New Town, Banks Town. Graceless with none of the idealism of other settler nations, the naming in Sydney can be utilitarian. But somewhere, in loopholes as you trundle west, the names stretch out a little and start to play: Yagoona. Lakemba. Birrong. Cabramatta. Casula. Aboriginal words, like Milperra, traditionally a welcome place for the recovery of men who have been injured by tribal war or initiation ceremonies. Years later, in 1917, by the time the meanings of ancient names were lost along with ancient meanings, the Soldier Settlement Scheme was established. It was one of the first settlements established by the Commonwealth and State to help repatriate servicemen who had served overseas during World War 1. For a moment in time, the old meaning weighed in and Milperra became a community to nurse war-damaged men once again.

At two in the afternoon on a Wednesday, I decide to meet up with Anne, a historian at the local library. I am trying to reconcile the contradictions between the Bankstown described by the media with my own experiences of the place I am slowly getting to know.

“I was born in the area and been working here thirty eight years and can provide details that others never even knew.” She tells me how there used to be a now forgotten street called Flood Corner because the water always used to swell and rise there.

She tells me how active Bankstown was in the Second World War efforts. “Many people don’t realise what a big role we played. The airstrip here was used by the American army and the British HMAS naval air force. It was all very hush-hush. There was a bunker here, undiscovered until the 1970s, which was a central part of the operation in case Australia was invaded. Max Dupain was commissioned to make artwork that camouflaged the area from aerial shots. There were model houses constructed and aerials that were camouflaged to look like hills hoists and fake chickens and sheep. A woman who used to work in the bunker told me later how she would catch the bus out to the city, pretending to go to another job, and then came back by train so no one would know she worked at the bunker.”

She stops to tell off some school kids who have started shouting with laughter and turns back to me. “There used to be a rule in Council to only employ local people as staff. Now it has changed, which took some getting used to when jobs were moved around, but I guess it's good because outsiders can give another perspective. I'm lucky with keeping my job; they don’t need new people because history never changes,” she says with a laugh.

I think about how outsiders can provide new meaning and how history never changes as I sift through public records. Detailed council minutes and painstaking recordings of road change, new bridges, and infrastructure. I read about Villawood, which was originally used as a welcoming point, a migrant hostel set up as part of a nation building agenda, to house Europeans fleeing the Second World War. But the conditions were so poor. Marriages cracked under pressure. The migrants complained of starvation, stink and degradation. And eventually the hostel was shut down and many settled in Bankstown. And how it was then opened years later as a centre to detain refugees fleeing their war torn countries. And the conditions are so poor. Children have been separated from their families. They sew their mouths shut to protest the degradation. But they are kept locked up because people are scared of changing landscapes.

I think about how history never changes as I read about a man called 'Black Charlie' who has an entire page dedicated to him in a local history pamphlet Anne handed to me. His real name was Charlie Luzon and he lived in a house of corrugated iron, near Edgar street South. After he died, locals used to believe they could see his ghost haunting Marion Street. “Why is there a whole page on him?” I ask Anne.

“Because he shot a rifle at 9pm every night,” she replies.

“Well, no one really knows.”

“Why was he called ‘Black Charlie’?”

“Some say he was Yugoslavian, or Latvian and others say Aboriginal.”

I wonder why, out of all the characters in the area it is the ghost of this man, who so little is known about, that appears to residents. I think about Black Charlie, about Villawood, about Bushrangers and Bankstown and how the unknown drives deep in our bones, instilling fear, defining us. Bankstown has always been haunted; whether it is by the widespread fears reinforced by the media, or by the local imaginings of a man firing a gun into the dark abyss of night. I wonder if we can ever shake the ghosts of our past that lurk in the sandstone and honeycombed ridges of this city to map out new perspectives.

The ibis are preparing to roost along the railway line as I catch the evening train home. Their scrotum-like heads stick out of the branches. Each time a train whooshes past, they let out a flurried mess of matted feathers. In one homeland, amongst the river systems of inland Australia, they were a proud bird, a noble creature to be reckoned with. In Ancient Egypt, they held the scales of fate aloft by the light of the swollen moon. Now here, entrenched in the suburbs, they pick and scab morsels from the trashcans at Wiley Park. But on occasion, as they swoop over Lakemba mosque, you can see their necks elongate with an old pride and a wisdom in their crinkled eye.